To all my blog fans (yes I am talking to the one of you...) my deepest apologies that I haven't submitted any entries lately. The good news or bad news for most woman and children is that I am back and have some in the works. Just because I haven't written, does not mean the most ridiculous stories aren't occurrring in my life. They are just simmering in my blackberry notepad, waiting feverishly for Tom Hanks from "Da Vinci Code," to come and decipher the drunken cryptic jibberish I've inputted while most likely intoxicated. While my new blogs are still cooking in my computer oven, here is the latest piece I wrote for Happy Hour Magazine. You can read all my blogs there directly @ http://www.happyhourmagonline.com/Happyhour-Blogs/ - you can go on there and input comments it appears, but I clicked on the link until my finger was rubbed raw and got nowhere... more Shenangians blogs to follow shortly...

Portopong in the pool


For any beer drinker with an infatuation for pounding beers and a burning desire for fierce competition, the game formerly known as Beer Pong is an excellent way to spend an afternoon of innovative drinking inebriation. The game has drawn the attention of thousands of drinkers everywhere, unwilling to stand for drinking mediocrity. The origin of the game dates back to the 1980’s, but in the last several years this pastime, which essentially guarantees intoxication to each player participating, has hit mainstream faster than Britney Spear's crotch shots to the Internet.

The idea of getting smashed while also competing in a sport is something most drinkers and athletes rarely get to do without the looming threat of an errantly thrown baseball to the groin, a spiked volleyball to the head, or a stray shuttlecock to the eye as they are looking in another direction. Beer pong not only eliminates all threats of potential injury but also provides a day of pure drinking bliss and the thrill of potential victory.

This is all fine and dandy for those who like to enjoy their pastime on land, but where does this leave the amphibious drinkers one might ask? Until recently, they were left out, forced to watch their peers have the time of their lives as they dejectedly floated down rivers, unhappily lounged on pool rafts or pouted in hot tubs left to wonder…If only they could just keep the red cups from floating away they too could enjoy…

Just at the point where salvation seemed impossible, the glorious Portopong was created and instantly one’s beer pong addiction and desire for water was joined together in joyous drinking innovation matrimony.

This brilliant invention can be blown up and used anywhere for splendiferous fun without getting out of the water. It works great for pools, lakes, over tables while camping or even for those of you who get the beer pong itch when walking by small ponds on the side of the road. It is easy to blow up to use and easy to deflate and store away for those non rainy days when you get the urge for some swimming and beer pong debauchery.

The best part about the Portopong is that when you’ve had a few too many, you can also pass out on it, making this the only drinking apparatus to also double as a bed! 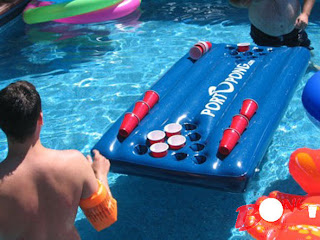 One can pick up this inflatable ingenuity at www.portopong.com for just around $50 and it comes in a variety of colors. (Obese man with grotesque, hairy beer gut (pictured), sold separately). I guarantee it will improve your beer pong experience.
Posted by Steve at 12:11 AM